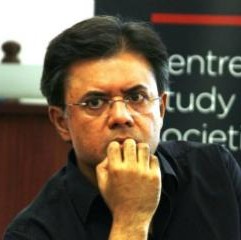 Sundaram’s essays have been translated into various languages in India, Asia, and Europe. His current research deals with urban fear after media modernity, where he looks at the worlds of image circulation after the mobile phone, ideas of transparency and secrecy, and the media event.

Sundaram was one of the initiators of the Centre’s Sarai programme which he co-directs with his colleague Ravi Vasudevan. He has co-edited the critically acclaimed Sarai Reader series: The Public Domain (2001), The Cities of Everyday Life (2002), Shaping Technologies (2003), Crisis Media (2004), and Turbulence (2006).

His other publications include Pirate Modernity: Media Urbanism in Delhi (2009). Two of his other volumes  are No Limits: Media Studies from India (Oxford University Press, 2012) and Delhi’s Twentieth Century (forthcoming OUP).